Windows Update with Windows 10 & Windows Server 2016 was modified so that it could be integrated with the new UI. The old Windows Update is now gone from Control Panel (I am so sad…) and if you have to view updates, all you can do is

With earlier versions of Windows, there used to be utility wuauclt but that does not work anymore since it does not update the UI which is accessed through Settings.exe

Now, if you try typing the following command in an Administrator command prompt on Windows 10 or Windows Server 2016, nothing will happen – wuauclt /detectnow

Now, in order to force check Windows Update, follow the below instructions –

Note: USOClient.exe is located in C:\Windows\System32

This will also force the client to report its status to the WSUS server (if configured).

On using Sysinternal’s Strings on UsoClient.exe, I found that there are more switches which can be used –

Recently, I was working with the Windows Update API on Server 2016 and initially this caused a lot of trouble because patches were installed but were not being reported properly in the UI. I found this executable by checking out the following –

found on Configmonkey.co.uk consolidating here for my own records

We discovered an issue on a client site where multiple distinct clients could have the same MAC address. In this case the end-point would not behave as expected as the deployments the client would receive may not be the ones you expected.

There are many ways to skin this particular cat but this seemed like a viable scenario to demo a how to query the ConfigMgr database to scan for instances where a client had a particular MAC Address.

Update 04/06/2015:
Having a browse around turns out this functionality already exists!

The SELECT statement is used to decide what information you would like retrieved by the Query in this case the following:

You can use the query builder to add/remove fields to your preference.

FROM statement indicates which table the information is stored in, in this case SMS_R_SYSTEM

The WHERE statement is the condition by which results are filtered.

##PRM: ##  will prompt the user to enter information, the message prompt and data type will match that of the field you have targeted.

In this case System.Resource.MACAddresses and data type text

The following Microsoft management solutions are all now part of the Microsoft Endpoint Manager brand:

Configuration Manager console: Find shortcuts to the console and the Remote Control Viewer under the Windows Start menu in the Microsoft Endpoint Manager folder.

Make sure to update any internal documentation that you maintain to include these new locations.

In Windows 10, when you open the Start menu, type the name to find the icon. For example, enter Configuration Manager or Software Center.

Extend and migrate on-premises site to Microsoft Azure
This new tool helps you to programmatically create Azure virtual machines (VMs) for Configuration Manager. It can install with default settings site roles like a passive site server, management points, and distribution points. After you validate the new roles, use them as additional site systems for high availability. You can also remove the on-premises site system role and only keep the Azure VM role.

When you install Connected Cache on a Configuration Manager distribution point, it offloads Delivery Optimization service traffic to local sources. Connected Cache does this behavior by efficiently caching content at the byte-range level.

For co-managed devices, and when you configure Intune to take Configuration Manager compliance assessment results as part of the overall compliance status, this information is sent to Azure Active Directory. You can then use it for conditional access to your Office 365 resources.

Improvements to application groups
Starting in current branch version 1906, you can create a group of applications to send to a device collection as a single deployment. This release improves upon this feature:

Users can select Uninstall for the app group in Software Center.
You can deploy an app group to a user collection.
For more general information, see Create application groups.

Task sequence download on demand over the internet
You can use the task sequence to deploy a Windows 10 in-place upgrade via the cloud management gateway (CMG). However, it requires the deployment to download all content locally before starting the task sequence.

Starting in this release, the task sequence engine can download packages on-demand from a content-enabled CMG or a cloud distribution point. This change provides additional flexibility with your Windows 10 in-place upgrade deployments to internet-based devices.

Improved language support in task sequence
This release adds control over language configuration during OS deployment. If you’re already applying these language settings, this change can help you simplify your OS deployment task sequence. Instead of using multiple steps per language or separate scripts, use one instance per language of the built-in Apply Windows Settings step with a condition for that language.

New variable for Windows 10 in-place upgrade
To address timing issues with the Window 10 in-place upgrade task sequence on high-performance devices when Windows setup is complete, you can now set a new task sequence variable, SetupCompletePause. When you assign a value in seconds to this variable, the Windows setup process delays that amount of time before it starts the task sequence. This timeout provides the Configuration Manager client additional time to initialize.

Optimize Windows 10 update delivery
Client settings for software updates
Client settings for Delivery Optimization
Additional software update filter for ADRs
You can now use Deployed as an update filter for your automatic deployment rules (ADRs). This filter helps identify new updates that might need to be deployed to your pilot or test collections.

The ability to message other Configuration Manager administrators through Microsoft Teams.
The Last Console Heartbeat column has replaced the Last Connected Time column.
An open console in the foreground sends a heartbeat every 10 minutes to help determine which console connections are currently active.
For more information, see View recently connected consoles and Message administrators.

Client diagnostics actions
There are new device actions for Client Diagnostics in the Configuration Manager console:

You can now use the All Subfolders search option from the Driver Packages and Queries nodes.
When a search returns more than 1,000 results, select OK on the notice bar to view more results.
Other updates
.

Next steps
As of December 20, 2019, version 1910 is globally available for all customers to install.

To install a new site, use a baseline version of Configuration Manager.

After you update a site, also review the Post-update checklist.

Computers that are running on virtual (Hyper-V or VMWare) will have an entry in win32_computersystem with attribute model in WMI.

You can create a collection to using table called SMS_G_System_COMPUTER_SYSTEM.

To list all physical computers ,create another collection using operator not in from above collection like below:

Here is a chart showing the patching cadence of the different rings.

If you are here is because you have deployed your 2012/2016 environment and you realize that your Reports are not visible/accessible via the SCSM Console. 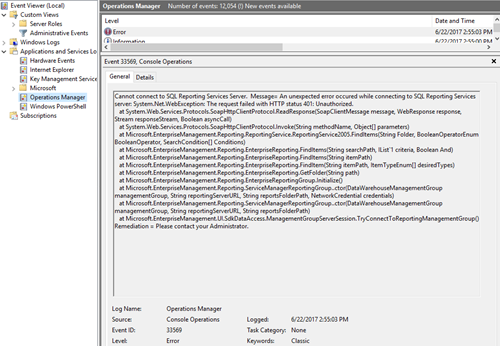 If you are getting this error is because you haven’t registered the SPN’s and delegated the appropiate permissions to Service Manager and Reporting Services.

Open Command Line as administrator on the Management Server

This command will set the appropriate SPNs that are needed for SCSM and SSRS.

I ran into some MP’s that after importing into a new environment found out the hard way will break your install.

Sadly there is nothing documented at MS to advise against importing these, And the system will actually let you import them. However if you do import them, you will get unexpected results. For instance, when I imported the SLO MP, my system would not allow me to create a AD connector.  I had to actually open a case with MS to undo the damage caused by importing these MPs.

Link to the TechNet list of SCSM version and build #’s

First a little bit of background.  My current project has me working at a federally regulated power company. (We’ll call them PowerBiz for anonymity sake) They are also publicly traded and accept credit cards so to say they have to be secure is an understatement.  They use a product called Bit9 as part of their protection strategy.

Bit 9 is a great product that is used for application white listing.  However it is a resource hog and a bit difficult to work around unless constant care and feeding is performed.  Part of that care and feeding is to keep it on the latest patch level as well as keep it “right sized” for your environment.

Now I have been fighting with getting a Win10 1803 image built for PowerBiz. As part of that build process PowerBiz wants to make sure that Bit9 is implemented the instant the image is laid down. to accomplish this, PowerBiz has set up their capture process to include the Bit9 parity agent installation and synchronization. This way there is never an instance of a computer being on the network without Bit9 installed. This is great saves me the trouble of having to build in wait steps to my imaging process. Not a problem Right? Wrong! as it turns out, PowerBiz is on an older version of Bit9. 7.2.3 to be exact. This version does not support 1803 much less even 1703. In order to bring it to a supported state, the Bit9 infrastructure would have to be raised to 7.2.4. Due to hardware constraints and the possible lack of knowledge regarding making hardware adjustments in a virtual environment, the bit9 infrastructure is not right sized for the current load and therefore would be directly impacted by patching.  This means in summary that PowerBiz is not going to be updating their environment until they can go through the process of building out a NEW environment

Having said all that, the troubleshooting to discover the above was a bit painful.  Nothing was being written in the SMSTS logs other than the task sequence failing with an obscure error code.  However this error code led me to the true source of logging used in the “configure Windows” step, the Setup.etl logs.  These logs though difficult to translate were a goldmine of information.  I had to first translate these from the .etl to something a little more readable.  this is where the command  tracerpt setup.etl -of csv came in handy.  This command converted the etl into 2 files, dumpfile.csv and summary.txt.  The first file is where I found the gold.  I did a quick search for the word “error” and came up with the following entries:

These entries or variants of the were repeated numerous times in the setup.etl logs.

This find led me to a discussion with the Bit9 SME who followed up with Carbon Black to find out the above mentioned support status.